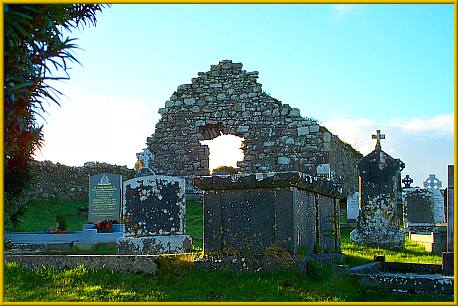 All that now remains of the old Killery Church are two sidewalls and a gable.

In 1346 the Church was the scene of an outrageous incident.
Ualgarg O'Rourke fled to the Church for sanctuary while he was pursued by rival tribal chiefs, who set fire to the building and killed O'Rourke, as he was attempting to escape the flames.

The Killery Straining String Stones are located near the centre of the graveyard attached to Killery Church.
Comprising a circle of round & oval shaped stones, at the centre of which a single rectangular shaped stone protrudes upright from the ground.

The rectangular shaped stone will have pieces of thread or strings attached to it.

The supposedly infallible cure for all sorts of aches, pains and sprains is invoked by the sufferer or deputy by removing one string from the stone and replacing it with another, while reciting certain prayers.
The removed string is then applied to the afflicted part.

The straining stones are dated fourteenth to eighteenth century.

Although, the ritual is a Christian plea for Divine intervention,
it obviously has its roots in Pagan times.

In 1824 human remains were found at a depth of six feet in a bog in Killery. The remains were so well preserved that an inquest was held.

The clothing was in an even better state of preservation and was said to be 15th. century.

The Royal Academy Museum had a man dressed in the clothing to enable a woodcut artist's impression to be taken of them.

The cloak and coat were composed of a soft, brown cloth with the coat having a finer texture.

The trousers had two different parts, the upper being thick and coarse and the lower a brown and yellow plaid.

Describing the coat, Sir William Wilde said:
" It's a sort of frock or tunic, it is single breasted and has fourteen circular buttons ingeniously formed of the same material as the coat itself.

" The sleeve has two portions, joined at an angle across the elbow, below which it is open with twelve small buttons along the outer flap."

The ancient Killery costume is housed at the National Museum in Dublin.

Poet W. B. Yeats' famous Lake Isle of Innisfree is closest to the County Sligo mainland from the little mooring at Killery.