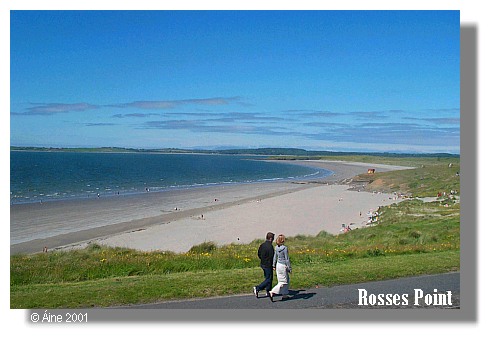 Situated about 5 miles north of Sligo Town, Rosses Point is a seaside village & holiday resort with a strong maritime tradition.
The village is perhaps

best known as the holiday home and childhood Paradise of the Yeats brothers, William and Jack.
The enchanting atmosphere

and character of Rosses Point helped fire the young boy's imagination and artistic talents with a lifelong expression.

The tales of daring seamen, smugglers, ships and pirates were all for real! Add to this, breathtaking scenes of land, sea & mountain - the Yeats brothers were in the midst of a special place and they knew it!

The activities of secret oath-bound gangs of smugglers was the subject of an 1820 public enquiry in Sligo. The smugglers were well equipped and confrontation with the authorities had led to armed clashes.

The Metal Man
12 ft. high & 7˝ ton, in the uniform of a 19th. century petty officer, was placed on Perch Rock, Rosses Point, in 1822. The Metal Man points to safe (deep water) passage for ships through Sligo Channel.

From night till morn, From morn till night,
All through the weary day, With arm outstretched
you point the course that leads to Sligo Quay.


Many houses in Rosses Point village have close associations with the Yeats family. Elsinore Lodge was built by John Black, 'Black Jack' was a successful smuggler who no doubt, created much needed local employment. His legal demise and the subsequent

seizure of his house & lands by the

authorities may not have been universally welcomed!
W. B. Yeat's cousin Henry Middleton, occupied Elsinore Lodge.

My name is Henry Middleton
I have a small demesne,
A small forgotten house that's set
On a storm-bitten green.

in Elsinore Lodge firmly beleived it to be haunted by smugglers and spoke of often hearing three ghostly knocks on the window pane!
Sadly, Elsinore Lodge is now in a desperate state of repair.
In Yeat's time, Moyle Lodge, near the old entrance to Elsinore Lodge was a Pollexfen summer house. 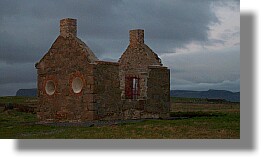 The Pilot House
('The Old Men of The Twilight') near the present day Yacht Club has two round windows from which smugglers, in the last century, kept a watchful eye on Sligo Bay.

Located near the Lifeboat Station,the "Waiting on Shore" monument depicts a woman holding her arms out to sea and stands as a memorial to Rosses Point men lost at sea, the sculpture also commemorates the women who waited on shore.

Facilities at Rosses Point include:

All the Above Within Walking Distance.