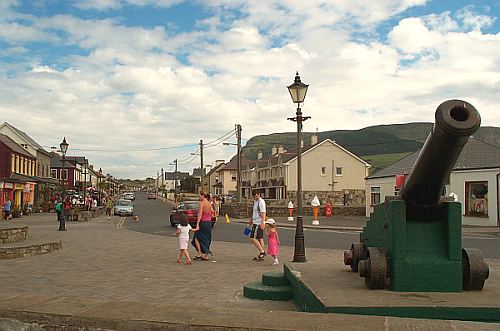 Strandhill is a very picturesque village situated about 5 miles west of Sligo City between the Atlantic Ocean and the slopes of towering Knocknarea Mountain. There are several miles of golden sandy beach and some gigantic sand dunes to explore!
The village is noted as a location for unforgetable views of Atlantic sunsets. It is an unspoilt and friendly holiday resort.

Strandhill's hight Atlantic surges provide some of the best surfing in Europe and it is an International Surfing Championship venue.

Possibly, due to it's pure sea breezes and particular setting, Strandhill has traditionally been regarded as a natural health resort. The area is very invigorating and creates a sense of well-being.
This is indeed "The Land of Heart's Desire"

In re-enactment of ancient events, a 'Warrior's Run' from the village to the summit of Knocknarea takes place each year and visitors are very welcome to participate!

The Strandhill area is steeped in legend and rich in archaeological remains.
The Carrowmore site alone, has one of the largest concentrations of Megalithic Tombs in Europe.
An Interpretative Centre is located nearby. https://www.sligozone.ie/Carrowmore/Carrowmore.htm

It's just a short walk from Strandhill village to the summit of Knocknarea and the legendary cairn of Maeve,
Iron Age Queen of Connaught.


The huge cairn is 40ft. high and has a circumference of 600ft.
There are breathtaking views from here. It is estimated that the stones on the cairn weigh about forty-thousand tons.
The cairn is unexcavated and may cover a Passage Tomb.

According to legend, a smaller grave of the warrior King of Connacht, Eogan Bel, lies near Maeve's Cairn.
The King was fatally injured at the Battle of Sligo (537 A.D.) and his last order was to be buried upright with his blood-red javelin in his hand on the summit of Knocknarea, facing north to see the enemy flee before the army of Connacht.
The heroic King inspired his army to the grave and beyond!

There in the Tomb stand the Dead Upright